Premier of Free CeCe! at the Twin Cities Film Festival

At the end of October, I was able to take a quick break from the mid-semester craziness of teaching at CU Denver and headed back to Minneapolis for the annual Minneapolis/St. Paul Film Festival. The reason for my visit was very specific – I had the privilege to attend the long awaited premier and post-screening discussion of the documentary Free CeCe (2016, directed by Jac Gares and produced by Laverne Cox) on 10/29/2016 at Intermedia Arts.

Some of you know that I have followed CeCe McDonald’s case closely as part of my dissertation work, and I am so thrilled that this important documentary, which was partially crowd-funded, is now seeing the light of day. 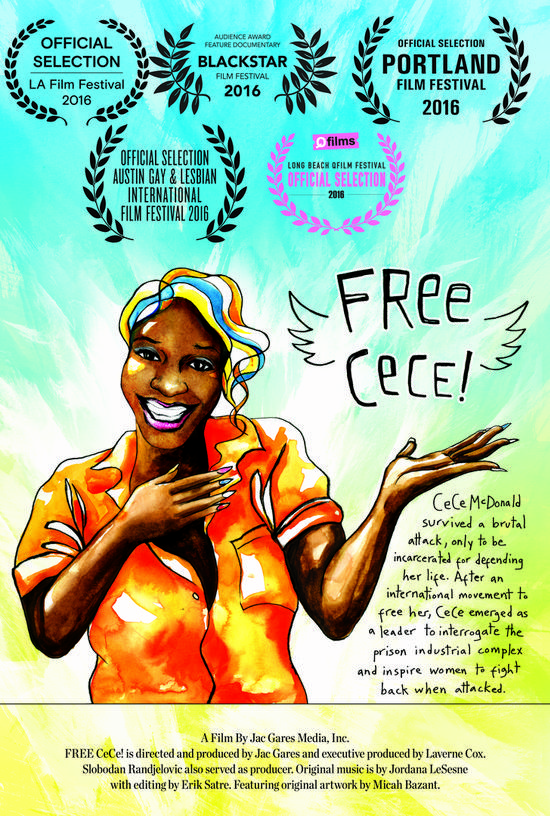 In June 2011 CeCe McDonald, a trans woman of color, and a group of her friends, decided to take a short walk to a grocery store in South Minneapolis. As McDonald and her friends kept walking along East 29th street, they passed the Schooner Tavern, a white collar neighborhood bar, they began hearing catcalls from across the street and were confronted with an onslaught of racial, homo- and trans-phobic slurs from some of its white patrons smoking and drinking outside the bar. Among those were Dean Schmitz, his ex-girlfriend Molly Flaherty, and Jenny Thoreson, Schmitz’ current girlfriend. What exactly was exchanged that night is still up for debate. However, McDonald and her friends testified that Schmitz and his group assaulted them with numerous slurs, calling them “faggots,” “nigger lovers,” “tranny,” and “a bunch of nigger babies.” Schmitz allegedly yelled: “Look at that boy dressed as a girl, tucking his dick in!” and “You niggers need to go back to Africa!” In an interview McDonald later remembered:

How the two groups came to get involved in a physical altercation remains unclear; however, all parties agreed that Molly Flaherty first threw her glass tumbler at McDonald, an act that caused a gash requiring eleven stitches to repair. As people piled onto Flaherty, a security guard from the Schooner walked out of the bar and saw how Schmitz was trying to shove McDonald off his ex-girlfriend. Schmitz and McDonald both stepped away from the group. According to the bar’s security guard, McDonald was holding onto a pair of fabric scissors while Schmitz was clenching his fists and approaching her before he suddenly fell over and exclaimed, “You stabbed me!” McDonald herself testified that she did not jab Schmitz but was trying to defend herself:

I had some scissors in my purse, just to be on the safe-side [be]cause I never know. I pulled them out. He came towards me, but… I didn’t stab him, it was like he ran into the scissors, because [crying/sighing] it’s like he was trying to get me; like he really just wanted to hurt me so bad. …I was just, only trying to protect us, myself.

Despite conflicting eyewitness accounts, police later arrested McDonald considering her both the instigator of, and aggressor in, the attack.

The documentary Free CeCe centers McDonald’s experiences to highlight the violence and discrimination that trans women of color face on a daily basis. Following McDonald for three years, Gares connects CeCe’s story to the intersectionality of oppressive structures and the systemic racism that impacts so many trans people, particularly those of color. The documentary powerfully chronicles her local Support Committee organizing around McDonald’s case and her journey from serving her 19-month prison sentence in an all-male facility in St. Cloud and traveling for speaking engagements on transgender rights and social justice across the U.S. after her release. We powerfully see McDonald’s own activism awakening during her incarceration and her stepping up as a leader herself as she is exposed to the critical race and prison abolition writing of Michelle Alexander’s “The New Jim Crow” and Angela Davis’ “Are Prisons Obsolete?” (who also makes an appearance in the documentary).

In an interview with the LA Times, McDonald asserted:  “I really want people to understand how necessary it is to challenge their privileges, decolonize their minds around the ways we’ve been conditioned to only accept certain kinds of people in our society,” McDonald said about telling her story. “I want people to challenge their ideas of gender identity and sexual orientation, challenge the status quo. Give other people a chance to live.”

During the post-screening Q&A, Andrea Jenkins moderated a panel comprised of CeCe, Laverne Cox, and director Jac Gares. The panelists thoughtfully engaged with questions on the inclusion of trans women in black feminism and womanism spaces. Cox thereby particularly stressed the ongoing importance of intersectional analyses advanced by bell hooks and others (despite the recent criticism hooks has been facing over her comments about Beyoncé). McDonald also reflected on her own journey and development as a leader on trans rights activism. Despite her Support Committee’s persistent encouragement to determine the organizing work and actions from prison, McDonald recalled her the uneasy relationship with becoming a leader “given that someone lost their life.”

While I really appreciated the documentary’s extensive focus on  survival – I think that the systemic racism that feeds people right back into the prison-industrial-complex could and should have been emphasized more; as well as a more critical engagement with the allegedly progressive liberalism in Minneapolis and Minnesota that is fundamentally grounded in an inherent whiteness. I would have also liked to hear more about what challenges CeCe is facing today: yes, she’s doing speaking engagements across the country but is she getting paid?

If you want to get more background on CeCe’s story, I invite you to read one of my publications, “#Free_CeCe: The Material Convergence of Social Media Activism” that takes an in-depth look at the organizing work around McDonald.